10 features every test automation tool should have

There are many test automation tools available on the market, but there is still a need for the “appropriate” ones. What does it mean? What features should the testing software have to meet the real needs of testing teams?

In the World Quality Report 2019-2020 study conducted by Capgemini, questions were asked about the greatest challenges related to achieving the level of test automation desired by testers and QA. It turns out that since 2018 the percentage of respondents who say that “They do not have the right testing software” (42 percent) has not changed. More than a third of them said they use too many automation tools. There are many voices on blogs and internet forums, which the software available on the market often endorses with the words: “Cool by design, just a pity that it doesn’t work” or “Why do I have to bother with functions from the previous era? We’ve previously mentioned some of these features in our post about testing. So what should not be missing from a tool of the 21st century? 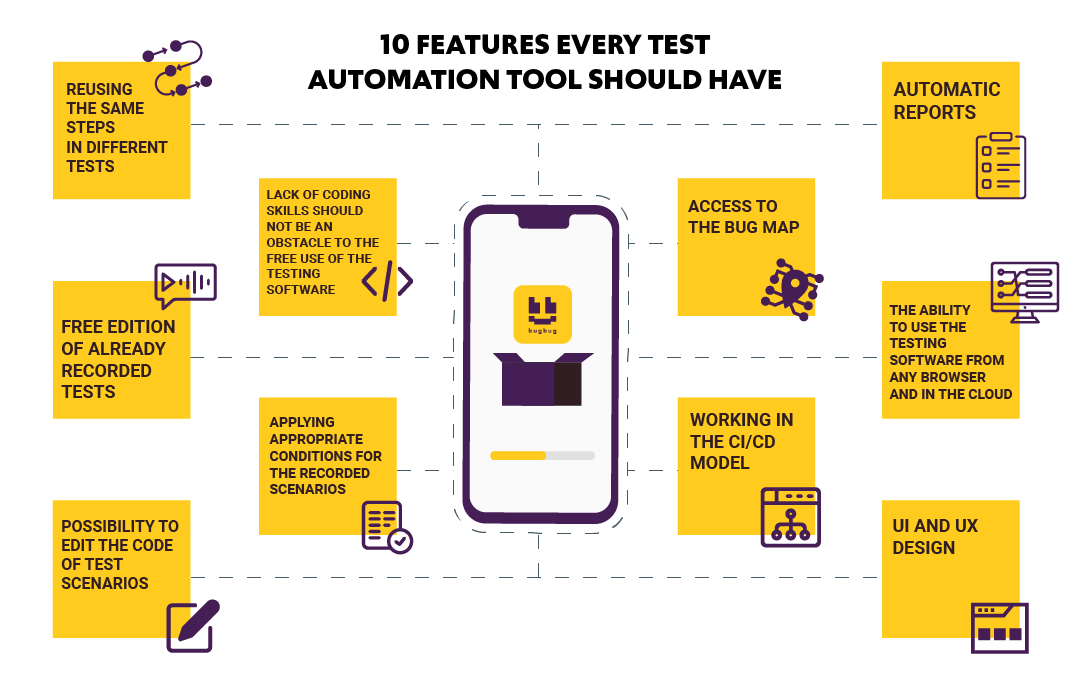 This postulate will be understood by anyone who recorded 150 test scenarios, which differed only in a few nuances in the final stages, but each time required a login path, registration or any other repetitive activities. This is a pure waste of time, unnecessary frustration and a burden on the team’s efficiency. A tool adequate to the needs should provide a module that allows the use of the same step (e.g. logging into the system) in various scenarios, without the need to record it each time. Such functionality has another additional benefit – in the event of an error in any of the steps, its repair will be visible in each test scenario where the step was used.

It is also a problem for testers who use tools to record test scenarios. In the case of iterations, which are the order of the day in teams working in Agile methodology, it is necessary to re-record the test scenario from start to finish. However, there are several tools on the market that allow you to make changes without having to repeat the entire procedure from the beginning. A useful function is also “overwriting” steps to already existing scenarios.

Many companies probably remember the pursuit of automation engineers, who were supposed to be a dream come true about test creativity and developer efficiency. Unfortunately, such people are real “specimens” on the market, and in times of increased demand for testing services, programming skills are not as important as the right approach and experience. The test automation market should also follow this trend and propose tools with built-in modules that previously required knowledge of programming languages, such as the Page Object Pattern described in point 1.

Testing software: possibility to edit the code of test scenarios

The fact that a given tool can be used without programming skills does not mean that it should not allow interference in the code of test scenarios. Despite the most sincere intentions, the creators of any tool are not able to predict all the situations that the testers will face, so the possibility of editing the code of the scenarios prepared with a given tool should be indisputable.

Test automation tools that can be safely called dinosaurs require the user to enter a pause between individual steps or have an automatically set waiting time between moving from one stage to the next. Intelligent tools record page reload or add conditions that allow you to proceed to the next step. It all happens automatically – without having to manually set the appropriate parameters after each step in each test scenario.

SaaS solutions are valued for their flexibility and efficiency. Their use, however, does not exclude even more far-reaching facilities in the form of the possibility of launching a given tool from any web browser. Thanks to this, the entire testing process is incomparably faster and easier – you do not have to wait, for example, for all the reports in the cloud to load, and you can start running a given test scenario right away.

The tester should immediately be informed about the types of errors and their areas of occurrence, and should be able to sort by test scenario type / functionality / error type.

The bug map is a functionality offered by the most modern test automation tools. Thanks to it, it is possible to precisely locate those areas of the code that can generate the most errors, which is very useful, among others. for regression testing. It replaces tedious exploratory tests of the entire product and allows you to focus on those areas that generate the greatest risk before the next implementation.

Working in the CI/CD model

The increasing popularity of Agile and DevOps methodologies has imposed a fast pace of work not only on programmers – also testers should be able to quickly adapt to changes and maximize their efficiency. A test automation tool tailored to these needs should enable easy integration with any system via API and, consequently, quick test launch. Parallel testing should also be a standard.

Looking at test automation tools from 10 years ago, one can get the impression that they were created with the assumption that an aesthetic and useful interface is intended only for the end customer, not for the person who has to provide/test it. Fortunately, over time, the vendors of this software saw the business value of UX design in their own projects. The easier it is to navigate and the more intuitive the test tool is, the greater the efficiency of testing. One would like to say – the tester is also a human! Fortunately, more and more producers do not ignore this rule anymore.