New era in testing industry – which trends will dominate in 2021?

Software testing industry has no choice – a new era is coming and it will determine development of the whole branch and its products such as web applications testing software. This new trend will also positively impact the management of IT departments. 2021 can be a breakout year in this respect.

For several years we have been witnessing a growing disproportion between development of project management (including programming) and the situation of testers in the IT industry. The latter are often excluded from the benefits that Agile, DevOps and CI/CD entail. It does not mean that testers do not work in these methodologies or that they are not part of the teams that implement them. According to the report „State of the Agile”, published in 2019, testing and web applications testing was placed at the top of the activities which are managed this way: 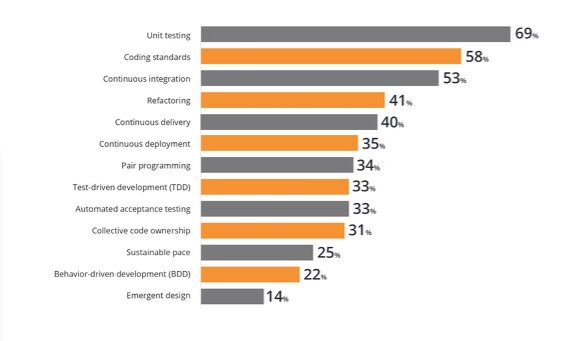 Within 13 years Agile from enthusiastically received novelty has become a dominating style of IT project management. In 2019 it was used in 97% of the surveyed businesses. DevOps technology was combined with Agile (or it was intended in the next 12 months) in 73% companies. Among benefits that Agile implementation brought they mentioned, among others, acceleration of software delivery, enhanced ability to manage changing priorities and increased productivity: 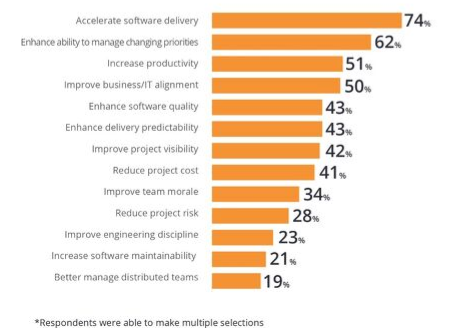 If you ask testers about the consequences of Agile implementation, they would probably agree with the above mentioned benefits concerning management of the workflow. However, in terms of their responsibilities, conclusions would not be so encouraging. And it is not the fault of Agile itself – it is a systemic problem, which was only exposed by this particular methodology.

How changes in the IT industry influenced the situation of testers?

They caused them to have much more work with the limited resources. Increased productivity of programmers provided testers with much more code to check, which makes web applications testing longer. Concurrently, their staff as well as software tools resources have not changed. It is also widely known that tester/QA’s positions are significantly less occupied than developers’, what was confirmed by StackOverflow survey from 2019, illustrating employment in the IT sector: 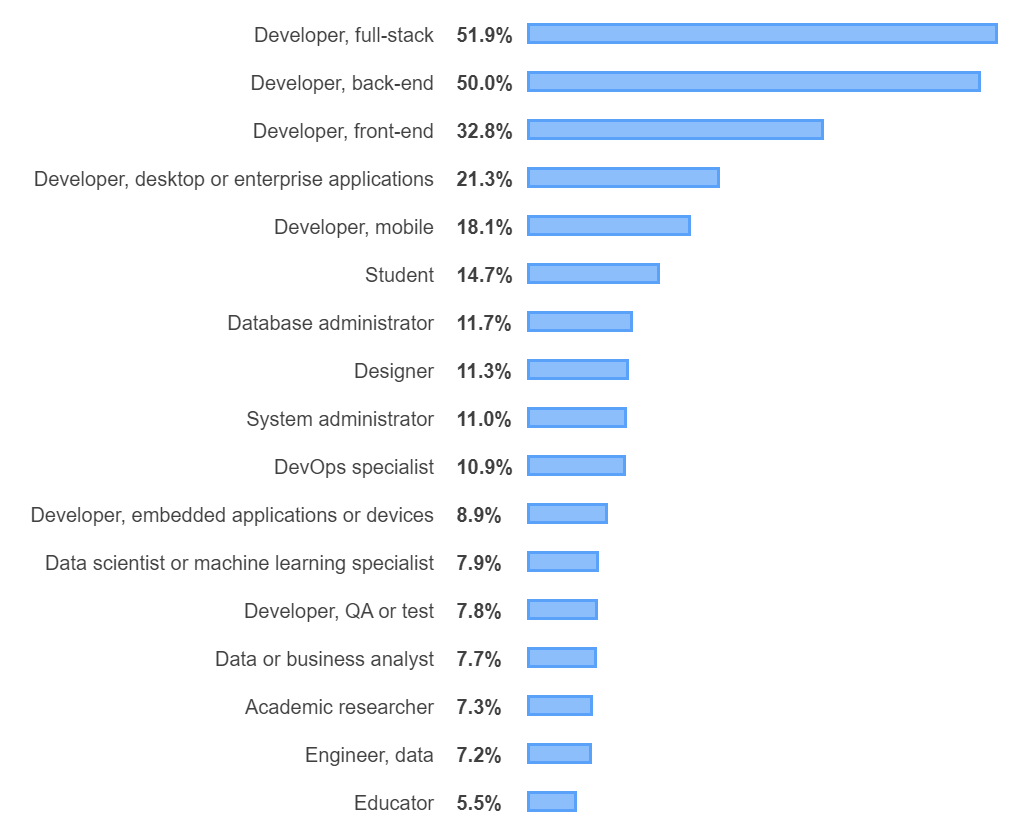 Year by year the number of employed as testers/QA increased by 1,1%. It is not much in comparison with robust growth of the programmers job market. Unfortunately, this situation has a negative impact on the whole IT sector, which suffers from the lack of adequate test coverage known as “testing gap”. It was first described by Jason Arbon in 2017 in the article AI for software testing”. He pointed out that the complexity of code and new products grows exponentially, but the increase of test coverage grows linearly.

In practice it means lack of adequate test coverage of newly implemented products or their selective testing (often with the use of exploratory tests). For some of the services/applications it could result in disappearance from the market or at least cause severe image losses. That was in the case of Uber company, which created an app for automatic car driving. Undetected bug cost the life of an USA citizen, what sparked a huge media storm.

Web application testing is starting to be set aside. According to the research conducted in the United Kingdom by Diffblue, as much as 42% developers resign from writing tests for the sake of faster product implementation. Experts from Softwaretestinggenius calculated that direct costs of testing constitute as much as 25% of the whole project budget. Indirect costs, including consequences of undetected bugs, double this figure!

Better web application testing = better quality products. How to do it?

Invest in appropriate tools, which will take the burden off the testers and enable them to optimise their work. The good news is that internationally things are quite busy. In Techavio report “Software Testing Services Market by Product, Geography, and End-user – Forecast and Analysis 2020-2024” experts anticipate that testing industry will grow 12,62% per year. The lead in terms of pace of development should take Asian countries, South America and Australia: 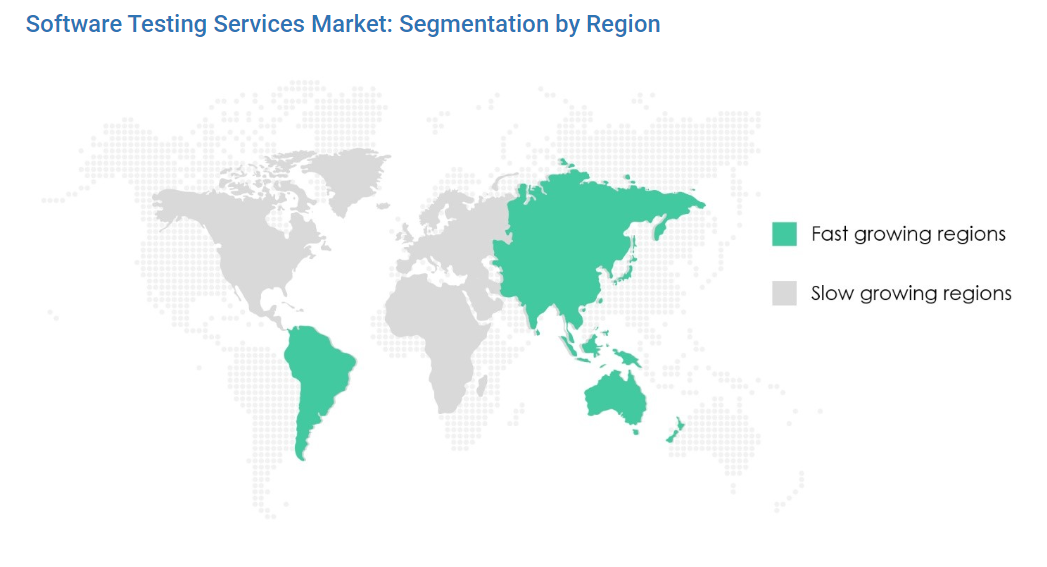 Interestingly enough, North America should be responsible for 41% of growth in the whole sector. Its main driver would be the mobile app market, which for the sake of constant introduction of the new features and rapidly changing user requirements undergo continuous changes. This phenomenon is also visible in Poland, where the scale of mobile devices use is constantly increasing: 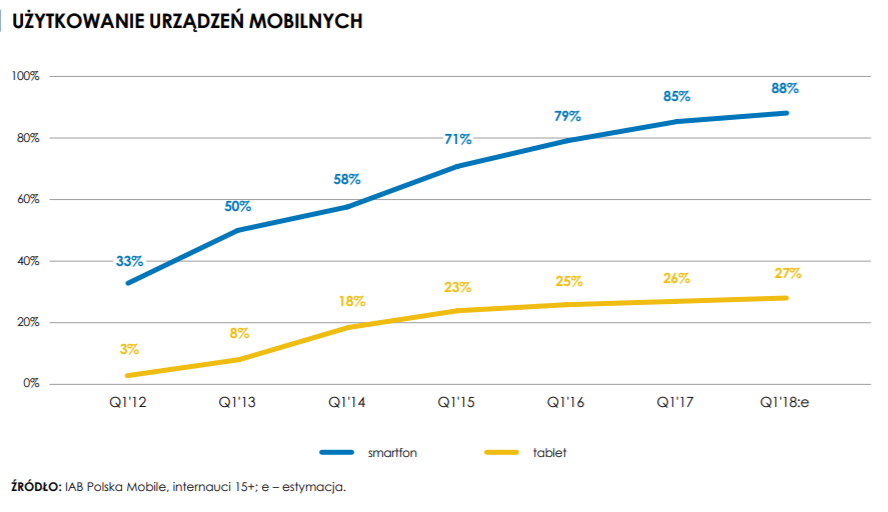 New trends in the testing industry – what quality would they bring?

We observe an increase in the amount of code provided for testing, as well as in demand for mobile products (not only – websites and e-commerce services are also thriving). Till now the common response to these challenges were automated tests. Although the tools that provide them are indispensable in the tester’s work, unfortunately many of them do not always correspond to rapidly changing customers’ expectations. Some of them were created several years ago and were a huge help in less dynamic circumstances – good examples could be commonly available in such software functions of recording tests. In a dynamically changing Agile environment, where new functions are often added with each sprint (or once established ones are modified), older tools do not enable for easy change of testing parameters. In practice it comes down to the necessity of recording each step from scratch, what loses the purpose of automation, that is diminishing the amount of work that has to be done manually…

Page Object Pattern is a notion well known by test programmers. Very briefly, it allows to group elements in separate classes so that the change in one of them does not impact remaining parts of the website. An example can be a log-in page, where particular fields (e.g login, password, “log-in” button) constitute distinct components. Thanks to that in the case of the malfunction in any of them it is possible to quickly implement necessary adjustments without interference in the whole code of the website.

New tools for test automation would enable the implementation of solutions such as Page Object Pattern without necessity of programming. Each element of the website (e.g already mentioned “log-in” button) would be available as a separate graphic element, which can be freely utilized according to the needs of different tests. Referring to the log-in website: if the test scenario includes it, it could be quickly added using drag-and-drop function from the main panel. Such a solution has one big advantage: if any of the elements breaks down, it could be easily fixed in all scenarios at once just by implementing changes in one place, because update is made in all tests that this particular element was used. Hence we can officially announce the end of an era when tests had to be recorded from scratch each time errors occurred in any of their elements.

New trend no.2: possibility of editing once recorded tests

Complete freedom and maximum speed are the wave of the future in creation and editing of tests. Till now modification of the already created scenario of automated tests was possible only after the test was recorded once again from the beginning after the end. New generation tools would enable not only for editing particular elements of the test that has already been recorded, but also for adding new parts to it at any time.

It is only a matter of time when we will reminisce about interfaces of the “old” programmes for test automation with the same tenderness as one that accompanied transition from Pegasus to Playstation. UX and UI design should not be overlooked in tools for people, whose task is to ensure the best experience for the end-user! This paradox is indeed an old reality: for several years testers have been working on programmes, which graphic design epitomises trends from the last decade… It also influences the quality of their work and it is great news that there are tools on the market that aim at changing this situation.

New trend no.4: launching highly-specialised tests from the web browser

Cloud solution does not exclude fast access to the tool from the web browser – this motto would guide authors of state-of-the art programs for test automation. Tester does not have to acquire advanced knowledge about programming nor technical skills of administrators: installation of the web browser plugin should suffice for effective work. The same applies to test launching: new generation tools would enable its start, test recording and its instant modification exclusively from the web browser. Testers no longer have to wait for test launch and reports from the cloud – they can act immediately at the minimum technical requirements.

New trend no. 5: real, not fake, reliability and stability

There are many tools that promise a lot, but in practice are disappointing and give testers a feeling of wasted time. Users that felt let down wrote several articles about such tools – here is an example». The future belongs to these test automation tools, which will give testers feeling of control and freedom in terms of taking action, concurrently delivering what they have promised in specification and marketing materials. 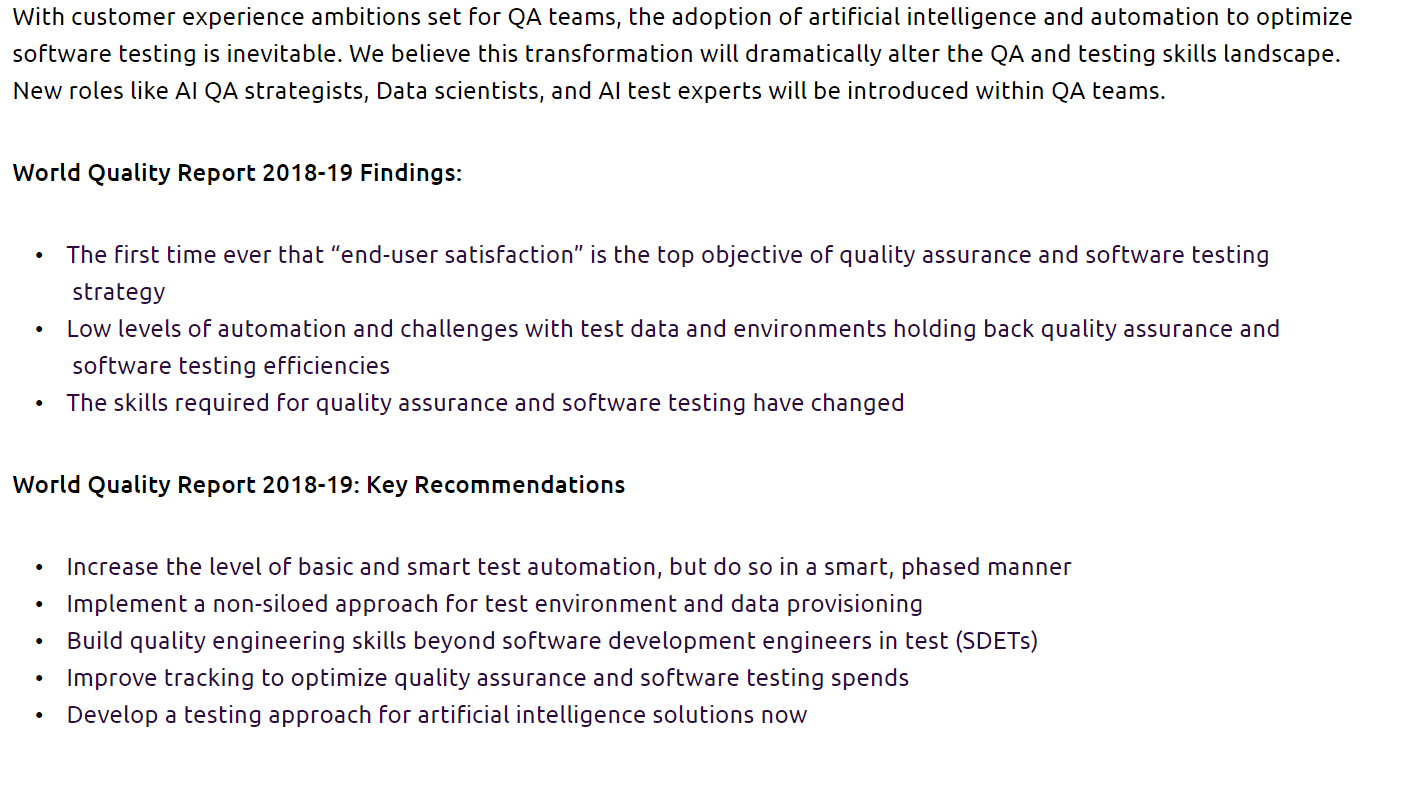 Our app is a modern software tool for testers and software developers that allows recording, editinng and running reliable end-to-end tests for web applications.